Physical Appearance: Mindy is an attractive woman of Chinese descent with silken black hair and warm brown eyes. As Qi-Lin she wears a green and gold costume with a black mask and black fingerless gloves. Concerns about fingerprints are offset by special oils she secretes that prevent her from leaving traces. 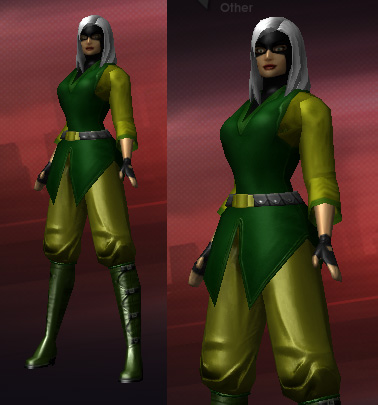 History: Mindy was born in Hong Kong well before the Chinese re-took possession of it. Her father was a successful businessman who was a staunch anti-communist. Knowing that China would take Hong Kong over, he slowly transferred his funds and business to Vancouver, making sure his daughter learned English.

Despite the major change in her life, Min was able to handle it relatively well. The private schools she was enrolled in had plenty of Chinese students and she grew to love Western culture. As she became a teenager she decided she wanted to become a vet, which annoyed her father but delighted her mother, who wanted to see her daughter succeed in this new world.

Mindy became an avid fan of Lionheart, Karma Doyle, and other female heroes. It was simply idle hero worship. Then one day she stumbled across the Science Squad base with a group of other teens, and things…changed. Each teen had either accidentally acquired a power or discovered some piece of equipment that facilitated their becoming a hero. The group named themselves the Neo-Phyters, defenders of Vancouver! She chose the name Qi-Lin, one of the four beasts of Chinese mythology, this one representing furry beasts as well as being a symbolizing purity, innocence, truth and justice.

Over the years Mindy had grown into a capable hero and had even become a Vindicator for a short time. but after a while she had decided to put her super hero “career” on hold and focus on becoming a veterinarian. These days she still performs heroics when called upon, protecting Vancouver and when needed Canada as a whole.

Personality: Mindy is friendly and open minded who is eager to help others, especially animals. She finds those who are cruel to animals especially henious and does volunteer work with a local animal shelter when she is not servicing local small ranches and their horses and livestock. She also provides self defense classes for women in Vancouver.

Powers/Skills: Mindy is able to speak fluent Cantonese and Mandarin as well as conversational Japanese, and has considerable knowledge of Latin. A student of Karma Doyle, she mastered a no-nonsense and effective style which is more ground based, consisting of low kicks, quick punches and elbow blows as well as throws and joint holds. Her philosophy is simple, if seemingly unheroic: target a body part and break it. She has basic skill in the use of melee weapons, including the machete, staff, escrima sticks, butterfly swords and knives. Doyle also stressed teaching in using common objects in melee combat such as chairs, pens, rolled up magazine, etc. When entering a room she instinctively scans it for potential weapons and things to bounce an opponent off of. The last place a person wants to fight Qi-Lin is a bathroom with all that porcelain and tile.

Qi-Lin is a licensed veterinary doctor, specializing in horses and livestock, although she never misses an opportunity to care for dogs, kittens and the like. She is a trained paramedic and while not a doctor over the years she has learned a great deal about human anatomy. Qi-Lin is also an experienced self-taught pharmacist.

The symbiote “riding” upon Mindy’s body gives her the ability to alter her body’s chemistry for several effects. internally, she is able to alter her hair, eye and skin color to some extent. The symbiote can combat fatigue poisons, giving her greater endurance and can provide her with brief moments of hysterical strength. The symbiote can also effectively fight infection and facilitate healing, although this is nothing like a “healing factor”. The symbiote can also fight off any drug or toxin Qi-Lin is exposed to, although the more lethal/potent the material the harder it is to combat it, so Qi-Lin can still be killed or incapacitated this way.

The symbiote can mimic any drug or toxin touched or imbibed by Mindy and can exude it through her sweat glands in a version that works upon skin contact. Tranquilizers, truth serum (sodium pentathol), hallucinegenics, there is virtually no limit to what she can produce. Qi-Lin can also produce other compounds like organic acids.

Qi Lin has also learned how to control emotions through the use of emitted pheromones, and can induce a variety of emotional and physical responses, among them fear, rage, lust, calm, and mild euphoria.

Equipment: Mindy’s costume is made of duraweave and teflex, bullet and bladeresistant materials. She also has an equipment belt that hold a variety of basic and useful items (i.e. burner phone, PDA, flashlight, cash, etc.). She often goes on patrol with a melee weapon or two, changing things up so she is not wholly dependent on any single one.